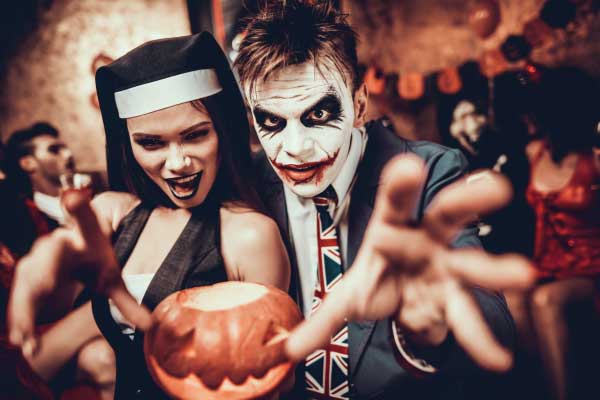 Discover the hottest trend in Halloween costume ideas for 2021!  Halloween is a time for unique creative ideas, expressing yourself, and having fun with friends. The question is ‘what are people going to be dressing up as in 2021?  What should you dare to wear?

This is the ultimate guide to Halloween costume ideas.

With technology overtaking all aspects of life, our daily lives have become littered with artificiality. So what’s next for Halloween costumes after bright colors and complex themes dominated in 2019? The answer may lie in the past! We looked at recent costume trends, and they are reverting to simpler things that were popular pre-millennium, Welcome Halloween throwbacks for 2021!

In 2019, the future was bright with neon hues and complex themes. We saw a revival in space-based spacesuits like astronauts from 2081.  Robots were prominent this year, too, with movies like long-time popular ‘I-robot’ inspiring a multitude of costumes of robots based on customized household appliances.

The 21st century is a mix of futuristic and human avatars, memorable characters like the computer voice in ‘The Matrix’ being popular choices for costumes. We also saw an upturn in the popularity of clever costumes that existed solely online, such as social media influencers and video game characters.  Other trends included a time-traveling back to the past when more straightforward ideas were widespread, with simpler popular costumes years ago becoming more prominent. Some examples include robots based on household items, aliens from movies like ‘ET,’ 80s pop culture references, and adult fancy dress outfits.

We may be living in a time where hyper-realistic experiences via social media have made reality seem dull by comparison. We believe that timeless Halloween costume ideas for 2021 are precisely what you may want to consider this year!

We’ve put together a 2021 Adult Costume Guide to help you create the perfect costume for Coloween.

If you want your outfit to win this year’s $1,500 Denver costume contest, you need to be creative and think outside the box for the character you are playing this year at the best Denver Halloween Party in Colorado!

The immersive world of Coloween becomes real life for one night; who will you become?!

Lolita costume – The Lolita fashion trend is a more significant idea. Ever right now.    If you’re looking for a  Halloween costume idea with a  unique style,   consider going as a Lolita character.

Japanese Geisha Halloween Costume – Geisha is one of the most charming characters in Japanese culture  —a  Halloween costume idea that’s perfect for a Coloween party or any New Year’s Eve Tokyo nightlife celebration.

Marijuana Costume – Trending on Instagram this year, the Marijuana Costume is an excellent choice for anyone who wants to be a Halloween costume that’s slightly controversial and perfect for a  Colorado Halloween party such as Coloween.

Sexy vampire Halloween costume – Popularized by the Twilight series, sexy vampires are alive and well in Halloween Costumes Ideas.  The vampire costume is an excellent choice for all the goths out there looking for a Halloween costume idea that’s still cool and fun enough to be worn in public.