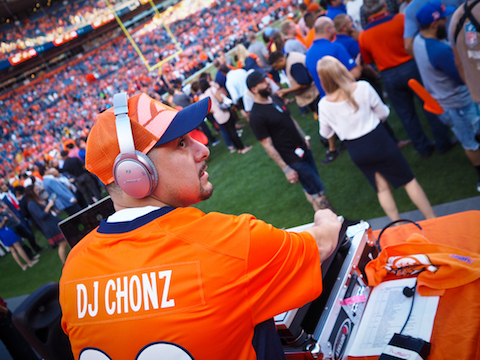 DJ Chonz aka Mario Rodriguez was born and raised in Denver and his preference for wearing only underwear as a kid earned him his nickname. His love for everything hip-hop was passed down from his older brother, Fienz, who is a b-boy and graffiti artist. After toying around in all four elements of hip-hop, Chonz gravitated towards DJing. After practicing and honing his skills in his basement for two years he emerged to compete in his first DJ competition. He won a local radio DJ competition in 1996 and from there he was invited to compete in the DMC Mixing Championships, Guitar Center Mixing Championships and the Lowrider-sponsored DJing competitions. After creating the Radio Bums MixtapeShow with Francois Baptiste and Kingdom, Chonz became KS107.5’s first on-air mixer. As the most recognizable DJ in Colorado, Chonz has garnered many high profile awards both locally and nationally. Not only a radio DJ, Chonz runs weekly events across the country, including the annual city sponsored Freestyle World Qualifier break dancing qualifier. “There are many genres of music,” Chonz says. “I am fortunate to be able to play all formats. This allows for growth as a person and as a DJ.”

DJ Chonz’ love for hip-hop started young and carried him from the basement to an award winning DJ career. You can’t talk about Colorado hip-hop without mentioning Chonz.