Halloween Costumes for Men with Beards (and Women Too) 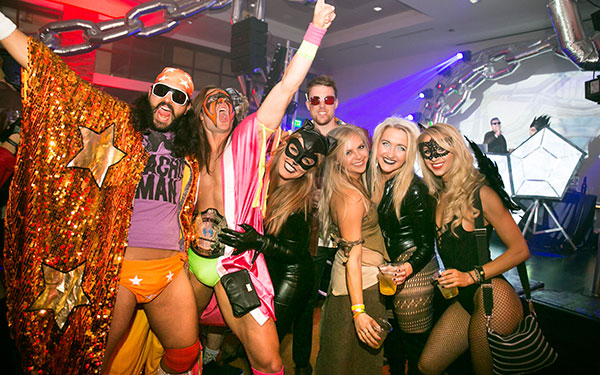 Rick from “The Walking Dead”

If you’re looking for TV characters with beards for Halloween, Rick from “The Walking Dead” is a current pop culture favorite. Find a tan button-up shirt, a gun belt, cowboy boots and some jeans and dirty up your hair for a real Rick experience. Add some fake guns and now you’re ready to kill some zombies. You’ll find that many of the characters on TWD provide some excellent inspiration for Halloween costumes for men with beards.

Alan from “The Hangover”

Alan, the oddball in the Hangover movies, is one of the more classic Halloween costumes for guys with beards, and a pretty simple look to pull together. Find jeans, a dirty t-shirt, your beard and some aviator shades from your own wardrobe. You just need to borrow a baby carrier and a baby doll from your friends with kids. Slap some aviator shades on the doll and you’re ready to party all night at Coloween with your own wolf pack.

Richie Tenebaum, former tennis prodigy and one of the screwed up Tenebaum geniuses in “The Royal Tenebaums” has a distinct style that makes for a great Halloween costume for guys with beards. To pull off Richie Tenebaum’s look it’s all about the accessories. Wear a plain tan suit with a tennis headband and wrist bands, a tennis polo underneath, and some aviator sunglasses. Now you’ve transformed into a depressed former tennis player with weird sister issues.

Live out your NBA dreams by being James Harden for a night. Well known for his full beard, the right beard growth is key for a proper Harden experience. Throw on your James Harden jersey and basketball shorts, grab a basketball and you’re now one of the top scorers in the NBA. As far as Halloween costumes for guys with beards go, this one is an easy lay-up.

For everyone who grew up watching wrestling, “Macho Man” Randy Savage is a great Halloween costume idea for guys with beards. To pull of the machismo of the Macho Man himself, go full on wrestler with a sparkling cape and some small wrestling shorts. Add some big shades, kneepads and a bandana to complete the look. A giant wrestling championship belt will help add to your Randy Savage energy. You better be prepared to flex all night long if you go with this Halloween costume for men with beards. 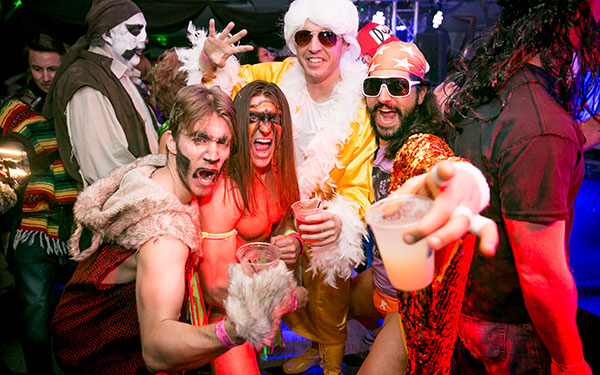 The Dude from “The Big Lebowski” (with Bonus Walter)

If you’re looking for characters with beards for Halloween, an easy costume is the Dude from “The Big Lebowski.” Grab your rattiest bathrobe, a white t-shirt, plaid shorts and some sandals, add some gray to your beard, wear a wig or rat up your hair, and you’re the Dude. Step it up by making it a group costume and have a friend go as Walter. All they need is shorts, a tan vest with pockets, a fake pistol, combat boots and a Folgers can. Bonus points for carrying around a rug and drinking white Russians all night, it’ll really tie the look together.

Who doesn’t want to be a god for Halloween? If you’ve been working the Crossfit circuit, show it off by wearing a toga. Add a gold crown and gold cuffs, a pair of Roman sandals and put some curl in your beard to complete the look. A few fake lightening bolts and you’ll be ready to smite people all night long. Looking for Halloween costumes for guys with beards, you don’t get much more iconic than one of the biggest gods of all time.

There’s a lot of different Forrest Gumps but the most distinctive Forrest is the running Forrest. Plus, once you have the beard the rest of the costume is easy to put together. The running Forrest features a brown beard with long brown hair, a red Bubba Gump shrimp hat, yellow shirt and red running shorts. Put on your best running shoes and prepare to hear “run Forrest run” all night long as you party down at Coloween, the largest Halloween party in Denver.

Khal Drogo from “Game of Thrones”

Even though “Game of Thrones” is over, it’s never gone from our hearts. Look no further than Khal Drogo for one of the best Halloween costume ideas for men with beards. Break out the guy liner, darken your eyes and paint some stripes on your chest. Add some large leather belts around your waist, some leather wristlets and a big sword and you’re almost there. If you have long hair put it back in a low ponytail and add some tiny ponytail holders to section off your beard. Bring your own Khaleesi or use this as the perfect opportunity to find one at Coloween. 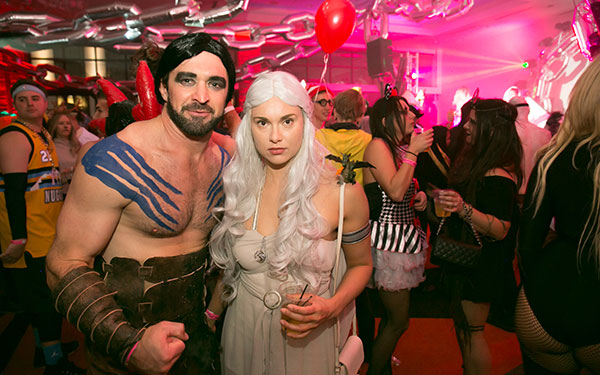 Halloween Costumes for Women with Beards

Men aren’t the only ones who can rock a beard. Some of the best Halloween costumes with a beard are for women. What better way to honor the memory of one of our most esteemed presidents than by turning him into a sex symbol? It’s easy to become your own sexy president, get a stove top hat, an Abraham beard, a pipe and a black blazer over some fishnet stockings. Now you’re a bodacious Lincoln, business on top, party on the bottom. And you don’t have to be a woman to rock this look, men can also throw on some heels and fishnets and a stove top hat to be their own Baberham Lincoln. If you’re looking for characters with beards for Halloween, Baberham Lincoln should be at the top of your list. Do your patriotic duty.

The Bearded Lady from “The Greatest Showman”

The best Halloween costumes with a beard for women is the Bearded Lady from “The Greatest Showman.” Find or rent an old fashioned Victorian gown, preferably in purple, put your hair in some ringlets and draw on your shapeliest brown beard. If you’re feeling lazy just put on a beard and suddenly your transformed into any bearded lady.

Trim Your Beard for Coloween

Buy Your Tickets and Enter Our $1500 Cash Costume Contest!